It is a weird world in which we find me defending journalists but welcome to the Year of Our Lord Score Hundred and Score.

In a recent blog post, I argued that one reason political debates were fracturing was that we did not have a clear idea of what we want from political media. It was the lack of this clarity that caused all kinds of mischief in the rest of our critiques, including what we mean by bias, ‘fake news’, &c., &c.

I noted that, although the disenchantment with the political media was traditionally associated with the disengaged, there was a new class of ‘hyper-engaged’ media consumers who felt entitled to see their own views — no matter their accuracy — reflected in the mainstream media.  This desire to see their own version of events parroted back to them is described as ‘accuracy’.

Most mysteriously of all, the tropes and narratives of the group closely resemble those deployed during the #Gamergate saga.  Where in the past journos would probably deserve a half dozen people sledging them for getting their facts wrong, now we have journos contending with hundreds of (mostly male) Twitter accounts hurling abuse.  Inexplicably, otherwise intelligent people have felt that, due to the ongoing sins of the media industry (particularly with regard to racism and misogyny) that attacks on female journalists and commentators from ethnic minorities is somehow justifiable.

Into this fray steps one of the key voices: PRGuy17.  Very likely to be a political staffer for the ALP, ‘he lives in Melbourne but works in Canberra’.  And he really, really cares about the media being ‘fair’ to Dan Andrews… beause he’s broken.

He has been running an ‘accuracy matters’ thread, drawing attention to what he perceives to be errors by journalists and the way that they refuse to behave in the way that makes him feel like a child emperor.  Of course, he targeted the Rachel Baxendale issue, and was a prominent vector for the abuse that she received online. 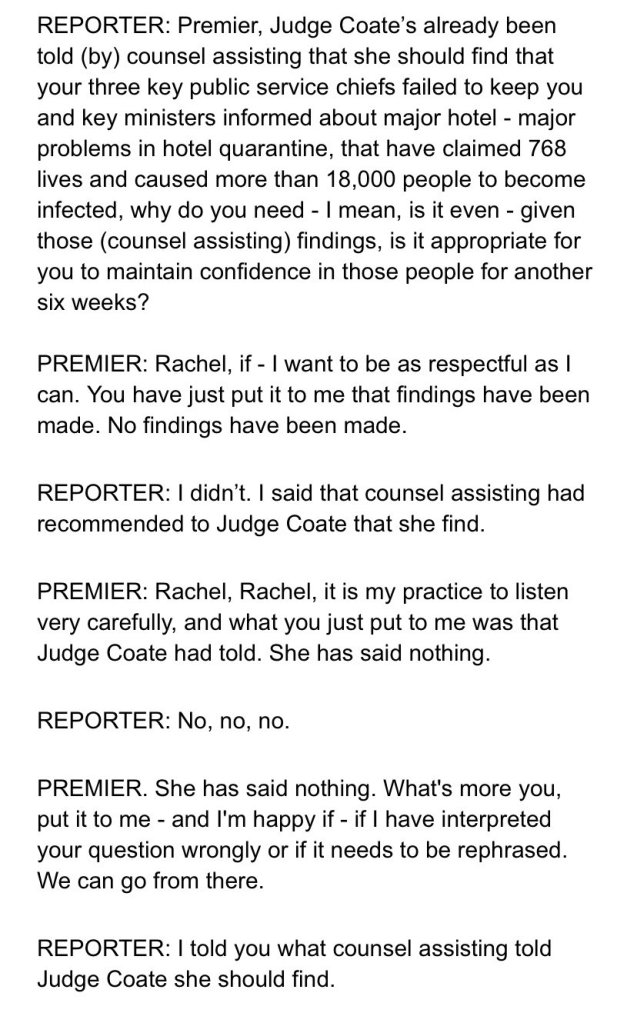 The claim made is that Baxendale lied in the transcript.  First, I listened to the full audio of the session (and not the clipped version that was in circulation) and it matches except for the parentheses (about which, we will soon return).

Third, the parentheses caused a lots of angst as it was claimed that Baxendale was inserting them to change the meaning of what she said… but it doesn’t.  Parentheses are commonly used in transcripts to give the reader a better sense of what is missed from the spoken delivery especially, as in this case, the question is not stated particularly clearly and the use of pronouns makes it hard to follow.

But this was an unforgivable sin according to PRGuy17, who issued a ‘corrected’ version to people without context.

Second, and a quibble, it incorrectly deletes ‘been’ from the text, even though ‘been’ is audible in the video (it’s just not enunciated well).

But here’s the best and clearest example of how we know that he is not a good faith actor.  Earlier, he had used somewhat unconventional methods to make the claim that anti-Dan Andrews sentiment wasn’t real, but an attack by Twitter bots and other malicious accounts.  This was quickly debunked by academics, but he persisted in publishing his ‘analysis’.

Here is his network graph:

‘Each red label is a suspicious account posting to the blue labels, which are hashtags‘, he said.

What did he do in response to this colossal fuck up?  He redacted the names from future releases:

You will notice that MCo**e appears again in the suspicious accounts list…  Gosh, I wonder who that might be…?

These people, like PRGuy17, are intellectually dishonest trolls and the comparison to #Gamergate is apt.  I am extremely critical of political media and political journalism, but my criticisms are based on principles that can be clearly articulated without hand-waving to lofty and nebulous aspirations.  Intellectually credible critiques of political media come from rational, reasonable, informed analysis; these people are actively misleading public debate in order to silence criticism of their political favourites.  It is toxic and we need structures in place to lance the boil.

One thought on “Quick Post: Correcting the errors of @PRGuy17 and #ThisIsNotJournalism”