Sometimes you get a question so basic that it makes you double check that you understand a topic as well as you think you do.  Over on popular Baby Boomer website Twitter.dot.com, I was asked what the difference was between #notallmen and #notallmuslims.

Isn’t it obvious that they’re different, I thought (and opined)?  These are reactions with substantively different structures, in the same way that ‘No squares have five sides’ and ‘No creature has a heart and no liver’ are substantively different structures.  Although I knew I was correct, it occurred to me that it was more difficult to persuade somebody who disagreed with me.  So here’s my Straight White Male Supermansplain.

Let’s start back at the beginning.

The feminist critique of patriarchal social structures is not about individual men.  The suffragette movement did not begin because Bob forbade a woman (or all women) from voting.  But that sort of ‘this isn’t about individuals’ rhetoric doesn’t fly in our hyperliberal age where we reject notions of collective responsibility, collective accountability, or even collective identity.

I could include a swipe here about so-called ‘liberal feminism’ but I’ve done that one to death.

So when women used Twitter to share their experiences of how male society treated them, they were barraged by responses from (individual) men claiming that not all men were like that.  This response fundamentally misunderstands the critique.  Women aren’t complaining that an individual man performed some individual act that disadvantaged them; they are complaining that this is part of a collective act that disadvantages them.

The response to #notallmen has been interesting.  There are those men who adamantly believe that they are not part of a larger collective identity that oppresses women.  Men, like mushrooms, sprout up from the Earth devoid of culture, education, and reason, and engage with the world in the way that’s most economically rational.  They like their women like they like their women in videogames: with a small and predictable range of responses.

There’s a lesser critiqued response which I’ve also found interesting which I call #notlikeothermen.  ‘Male Feminists’ (who also aren’t a thing) respond to the hashtag as if it is an indicator of their point of difference.  They learn not to use the phrase ‘not all men’ because that would signify that they are not the male feminists that they aspire to be.  That is, they learn the codes to signify certain personal attributes.

For my money, if you’re going to be the oppressor, be good at it.  Conservatives always win in the end and men aren’t going to be part of the feminist solution.

Back to the point: notice the structure of the argument.  Here’s a collective identity with a systemic problem; each individual person is irrelevant.

The ‘not all Muslims are terrorists’ argument is in response to a different kind of argument, and the response is shorthand for ‘the signifiers that you are using to make your argument that all Muslims are terrorists are wildly inaccurate’.  So the original argument is that you flick on the news and you see bombings and beheadings and terrorism and social problems, and these images include Muslim symbols.  There appears to be an obvious correlation between Islam and terrorism, so therefore we should call upon all Muslims to denounce terrorism and maybe stop migration from Muslim countries, &c., &c., &c.

Some of my lefty friends, after slagging off right wing policies that they don’t understand, will assure me that I’m an ‘okay’ conservative because I’m a ‘moderate’.  A moderate?!  I support the death penalty, censorship, blasphemy laws, religious education, the monarchy, &c., &c., &c.  Apparently, I’m a ‘moderate’ because I’m not homophobic or racist.  That’s a low bar.

Back to ‘Not all Muslims’…

Nobody is seriously suggesting that there is a collective identity that is responsible for terrorism.  First, not all terrorists are Muslim.  Second, what is the alleged link between Islam and terrorism?  We can all see the link between men and the patriarchal systems critiqued by feminists, but there’s not an analogous link between Islam and terrorism.  Third, the ‘Muslim’ aspect of the terrorism is easily the least significant aspect and focusing upon it renders more important aspects invisible.  Terrorism is clearly a function of economic inequality.  There’s no ifs, buts, or maybes.  Terrorism is the violent expression of the disenfranchised.  When we fought Germany in World War II, we never worried about Nazis exploding car bombs in town squares.  When we fought Russia during the Cold War, we never worried about Communists bombing passenger trains.  But when we were punching on with Ireland, hell yeah we worried about explosives in post boxes.  When poor and poorly educated anti-abortion terrorists want to be heard, they don’t opt for expensive trials.  And so on and so forth.

So ‘not all Muslims’ is clearly different to ‘not all men’.  They are not the same response to the same kind of argument.

There’s one final point to be made: not all correct conclusions are derived from good arguments.  We should, wherever possible, engage only with the best ideas.  It’s why we are in desperate need of public intellectuals.

The person who inspired this post noted some arguments advanced by popular social media feminists.  They were particularly interested in a picture that tried to rebut the ‘not all men’ response by reference to poisoned M&Ms. 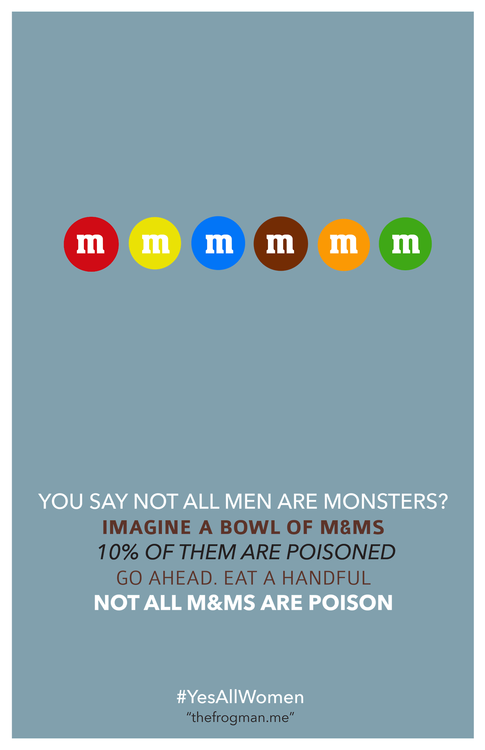 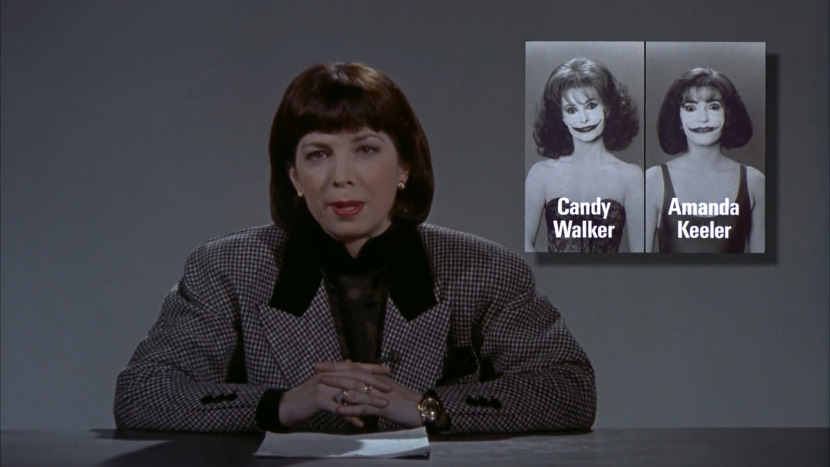