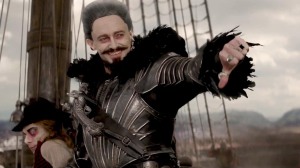 Pan, with Hugh Jackman as Captain Blackbeard and Rooney Mara as Tiger-Lily, gives us absolutely nothing.  If I was to hazard a guess, I’d suspect that somebody had an unworkable script lying around and thought that placing it within the world of an established franchise would make it marketable.  I call this the Troy approach.

J.M. Barrie’s original play (later, novel) are surprisingly complex beasts.  Marred by some next level racist nonsense about ‘Picaninnies’, the play is as relevant today as ever: grown men trapped by their fragile sense of self, desperately trying to shirk adult responsibilities, and trying to negotiate their relationship with women.  The surprising part about revisiting the original is the extremely awkward relationship between Peter and Wendy, the latter coerced into the role of ‘girlfriend as mother-figure’.

None of that complexity is to be found in Pan, which aims to be a prequel to Peter Pan.

Peter is left to an orphanage run by nuns.  The nuns are presented as horrible, self-interested harridans who are all fat and violent.  The boys all hope that their real mothers return to them, to fill the maternal void in their world currently dominated by the nuns.  For reasons that are never explained, the nuns are in cahoots with a tribe of magical pirates.  The pirates pay the nuns to kidnap the children and take them to Neverland where they must work in mines.

In one of the strangest scenes of the movie, the boys depart WWII-era London on a flying pirate ship to arrive at a camp of pirates singing Nirvana’s Smells Like Teen Spirit.  They sing it because Captain Blackbeard (Jackman) really freaking loves 1990s grunge rock or something.

Blackbeard is at war with the tribal people who live in Neverland’s forests beyond the mines.  He’s mining pixie dust or something to keep him young or something, and he’s waging war because he thinks the tribes are hoarding pixie dust.  Or something.  It’s not quite clear what’s going on.  The tribes people are exceptional fighters and keep thwarting the pirates plan, then ‘disappearing as if they were never there’.  We later discover that these tribes people have a massive freaking city made of bright lights and gaudy colours, making it quite easy for the pirates to find them when it’s convenient to the plot.

Peter arrives into this weird allusion to colonialism to discover that he is the Chosen One, the Pan.  It turns out that all the tribes people needed was a little, white English boy to save them.

There are a few dynamics worth exploring.

The first is Peter’s identity struggle.  He’s an orphan who wants to understand his identity.  He thinks he’s special.  He tries to be brave, but he is often scared.  He longs for another world where he can unleash himself and be lavished with praise.  Neverland caters to this fantasy: he’s actually a prince and he’s actually magical and he’s actually wanted and he’s actually not just another cog in a terrible economic machine that keeps him poor.

But Peter never actually does anything with this status.  Once he unlocks his powers, his one and only role is to tell the pixies to defend themselves.  That’s it.  They literally do all the plot resolution.  Ultimately, the story is about how one little boy discovers how privileged he is and then takes the credit of other people.  No wonder he never wants to grow up.

The second is the racial-political struggle of Neverland.  Rooney Mara plays Princess Tiger-Lily, the de facto leader of the tribes people.  The thing that’s most notable about Rooney Mara is that she is very white.  It was always going to be difficult to address the irreducible racism of the source material, but it feels like just casting white people doesn’t resolve that problem.  The tribe is interracial, and the symbols of the tribe are generically childish (which is a problem in its own right but on a far deeper level), but it’s still dominated by white people.  We then wonder what is the dynamic between the pirate society and the tribal society.  The pirates are industrial while the tribes people are primitive.  Why are they fighting?  Is it a territorial thing?  Does Blackbeard want absolute rule?  Is this a revenge thing?  The conflict between the two societies beyond ‘Colonial power wants indigenous people wiped out’ is difficult to understand.

And this leads into the third dynamic: the clearly religious undertones of the movie.  In all the exposition about the relationship between Blackbeard and the natives, Blackbeard is presented as a supernaturally demonic force who consumes everything he can.  All the good people are calling out for a saviour (despite the fact that they end up resolving the conflict themselves, but whatever).  Into this arena is a young woman, called Mary, who gives birth under unusual circumstances.  Her Son will have amazing powers and every knee shall bend at his name.  When he is at his lowest point, he will have three days to rise up and reveal his true nature, transmogrified with light and reconnected with His kingdom which lasts forever and ever, amen.

It not like this dynamic is hidden.  The nuns, for example, are clearly irreligious and corrupted — a fairly lazy attack on established religion, repeating weird prejudices about the ‘true’ motives for the Church helping the poor (indoctrination).  The nuns (female, fat, ugly, selfish, greedy) are secretly selling innocent young boys to the Great Satan, Blackbeard.  Blackbeard himself has a lieutenant called ‘Bishop’ who harvests the boys and teaches them how to please Blackbeard.

Only the female-centred religion of the tribes people, the spirituality that connects humans with the supernatural aspects of nature, can heal Neverland.  Tiger-Lily is one of its secret-keepers, trained and ordained by Peter’s mother, Mary.

It would make Dan Brown proud.

But none of these elements is executed particularly well.  The clunky, ham-fisted script seems intent on only giving personalities but not characters.  So Tiger-Lily claims that the core difference between men of her tribe and the men of the pirate society is honesty and bravery.  But then she straight up lies to Peter about his mother.  When the pirate, Blackbeard, tells him the truth, she claims that there’s ‘more to the story’ and that he shouldn’t be angry with her.  When she explains it turns out that there’s isn’t more to the story.  She just straight up lied.

There is an odd moment when Peter is upset with Tiger-Lily for her lies, but Tiger-Lily is upset with their pirate friend, James Hook, for telling the truth.  Fortunately, they’ve all forgotten their grievances with each other by the next scene so the plot can progress with them all being friends.

Finally, there is the very strange way this movie acts as a prequel to Peter Pan.  With a prequel, you’ve already got a world built for you.  The world comes with rules, dynamics, and an environment.  Prequels and sequels are often criticised for being inconsistent with the original rules, dynamics, and environment because it suggests laziness.  Indeed, it’s the biggest criticism of Terminator 2: Judgement Day despite that film being absolutely amazing.

So the original Peter Pan gave us some rules, dynamics, and an environment.  Peter Pan never wants to grow up.  He never wants to be an old man.  He wants a mother figure.  The children can fly if they’ve got pixie dust and happy thoughts.  Mermaids are evil and try to drown men with their songs.

Pan scraps most of these rules.  Peter demonstrates that he is the chosen one by flying.  It’s such a rare trait that only the Messiah is able to perform the miracle.  His best friend is a pirate called James Hook who is a young man who just wants to go to ordinary society, but he ends up smitten with Tiger-Lily.  The spirit of Peter’s mother lives in a cave where she speaks to him about what a wonderful boy he is just for being born.  And the mermaids are helpful.

Come the end of the film, you don’t feel like you understand more about Peter Pan.  Indeed, you’re more baffled.  Tiger-Lily is clearly twenty years older than Peter in Pan… so why does she fancy him in Peter Pan?  Relationships between pixies and humans is notoriously, legendarily fraught according to Pan… so why does Tinkerbell fancy Peter in Peter Pan?  If Peter and Hook were such good mates when they were younger in Pan… why does Peter end up cutting off his hand?  And Hook is clearly an American huckster and swindler in Pan… how does he turn into Etonian gentleman in Peter Pan?  And if the pixies can end the tyranny of Captain Blackbeard in Pan… why haven’t they done the same to Captain Hook in Peter Pan?

And why do we never find out what happened to the tribes people’s best warrior?  Seriously, he just vanishes.

It’s all so very weird.

Despite the racism thing, Rooney Mara’s performance in this is genuinely very good.  I often feel sorry for excellent actors who are stuck in goddawful movies.  She could have dialed in a performance and nobody would have blamed her.  Hugh Jackman, on the other hand, shouldn’t be allowed in movies any more.  I’ve said this for a while now, but it’s time to give up the fantasy before he goes full Johnny Depp on us.