And you cannot run or ever, ever escape… Some notes on horror films

I’m sure there’s some pseudo-scientific reason why we love horror films — adrenaline rush, heightened emotions, &c. — but what is perhaps more interesting about movies is the way in which they scare us.  When we watch the films, we know that they’re up on a screen and that they are fiction.  There’s something about horror films which bypasses that cynical awareness of reality to make us embody the physical state of fear.

Curious and interested as I am, I watched Ring, Ju-On: The Grudge, and Pan’s Labyrinth in order to understand what it was about the stories and the way they were told which makes me frightened.  A bit of a masochist project, I admit, as my already rubbish sleep schedule was plagued by nightmares that night.

Before I jump in to overthinking horror films, it’s probably worth noting that the films I chose are clearly from a particular style of horror film: the fantasy, absurd, surreal sort of horror.  I’ve never been a fan of slash/gore films and don’t find them particularly scary.  I imagine that the analysis of those films would be easier: we respond to the violence on the screen.  In two of the three films I chose, there’s very little violence.  Something else is going on with these films beyond mere response to the obvious physical threat of people who wish to smear our organs across walls.

Ju-On: The Grudge is perhaps one of the scariest films I’ve watched.  This ultra-low budget explores an urban legend about a malevolent force (the Ju-On) which resides in an inner city neighbourhood and which grows by collecting victims.  The premiss of the film is explained with title cards at the start of the film, and then explored through six short pieces about people who fall victim to the monster.

While many fantasy films explore what happens when people cross the threshold into another world where the monster lives, Ju-On depicts the monster as encroaching on our own.  The worlds of the protagonists — one’s an aged care worker, another is a student, a third is an office worker, &c. — are so extremely mundane.  These people are in no way special, unique, or gifted.  They are victims of something they had no awareness.

At a stretch, it could be argued that the Ju-On represents those things which we overlook in our society, the people who end up being invisible.  There’s a recurring theme of neglected old people and ignored children.

But this reading feels like a stretch because it doesn’t fit nicely with the vast majority of the film where the Ju-On is just there.  This is a purposeless, unintelligible monster who is just there and, before you know it, it’s killed you.

The Ju-On escapes reason.  At one point in the film, one of the characters learns how to perceive the Ju-On (by putting her hands up to her face).  Although this allows her to perceive the creature, it doesn’t help her in any way.  The Ju-On still kills her and joins her to itself.

Perhaps this is the scariest element of the film: the horrible, relentless creature is entirely non-rational.  Even when we get some handle on how to perceive it, that brings us no closer to understanding what it is, how to avoid it, or even how to contain it.

This absurdity intersects with the random, chaotic nature of the creature, and we can’t control the terms on which we engage with the film.  If it doesn’t make sense, we can’t defend ourselves.

But it’s also recognising an absurdity within ourselves.  Sitting there, in the dark, watching a screen, we are terrified of a kid in white body paint and a woman in white body paint who makes clicking noises and crawls down stairs.  There is no way that we should be scared of that.  And yet…

In contrast to Ju-On, Ring is all subjugating the supernatural horror element to reason and logic.  In this fim, a journalist is trying to understand the death of a young girl who appears to have been frightened to death.  The story surrounding her death is that she saw a mysterious video and then died seven days later.

The journalist collects more information and, for a while, it looks like the threat in this film is unfathomable.  The video, for example, is a series of disquietingly random images.

There comes a point in the film, however, when the journalist starts to find answers to all of the questions raised so far.  She begins to understand the elements of the film and — far from being random — each part is a clue towards understanding the monster.

As the film unfolds, we realise that the video makes a certain amount of sense.  A horrible crime was committed against a supernaturally powerful young girl, Sadako.  Thrown down a well, she claws at the walls, trying to escape.  Unsuccessful, her rage, pain, and fear are manifested in a video through confusing, disjointed, incoherent images.  Even though it’s confusing, disjointed, and incoherent, it’s still communication.  Behind the images are Sadako’s intent.

When we discover that the force behind the supernatural malaise is rational, the film becomes less scary.  Unlike in Ju-On, we can appease the monster in Ring (even if we do mistake its intent at the start: we think that Sadako wants to be loved, but really she just wants as many people as possible to know how badly she was treated).

Sadako’s case is a true representation of miasma.  Bad things happen when moral outrages go unpunished.  Supernaturally bad things happen because a moral outrage has put the cosmos out of balance.  Innocent people are harmed because the world has not been put aright.  Again, compare this with Ju-On.  While the two events involve the punishment of innocent people, the ghost of Ju-On is not trying to communicate any kind of message.  It’s just intent-less grudge.

As mentioned earlier, there’s very little violence in Ring or Ju-On.  Pan’s Labyrinth is of a similar kind, except the natural human world is violent while the fantasy horror world is less so.

Pan’s Labyrinth explores the world of a young girl, Ofelia, who travels with her mother to live with her step-father.  Her step-father is an officer in Franco’s National Movement, hunting rebels who hide in the forests.  Although he is a brutal and violent man, Ofelia is rarely a witness to this aspect of him.  Instead, she is immersed in a world where she is a lost princess, aided by a magical faun who guides her through three quests in order to reclaim her status.

Where Ju-On explored the invisibility of the fantasy element and Ring explored the struggle of the supernatural to fit within the natural world, Pan’s Labyrinth shows the fantasy world as co-existing, side by side with the natural world.  The labyrinth itself is through a portal in the gardens.  To engage with the first quest, Ofelia enters a portal at the base of a tree.  A later quest involves her creating her own portals.  The fantasy world isn’t actually here, but it is just on the other side of a doorway. 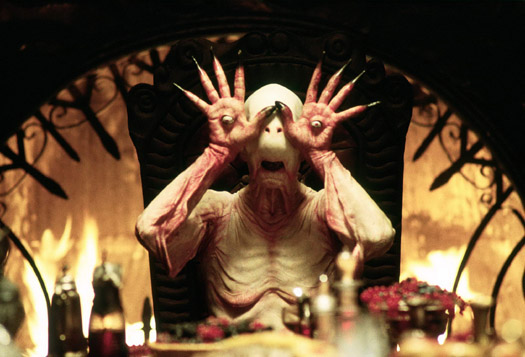 The fantasty horror non-violent element of Ofelia’s fantasy contrasts sharply with the brutally real, horrific violence of Ofelia’s real world.  A giant frog covers Ofelia in goo; her step-father bashes in the face of a rebel.  A scary man with eyes in his hands eats a fairy; her pregnant mother haemorrages blood.  The faun gets angry at Ofelia; a rebel slices open her step-father’s cheek.  Ofelia must put a mandrake in a bowl full of milk under her mother’s bed; her step-father brutalises a rebel until he’s unrecognisable.

Yet it is the fantastic elements which make us squirm.  When Ofelia is fleeing from the disfigured Pale Man, she’s fleeing to a world which contains her step-father.  She uses her ingenuity to escape the fantastic threat, and we are relieved that she is safely back in the house of a sadistic sociopath.

Yet the fantasy world still runs on rules.  The giant frog is sufficiently predictable that Ofelia can trick it.  If she doesn’t eat the food on the table, Ofelia will be safe from the Pale Man.  The faun gives Ofelia chances to make up for her crimes.  If anything, it’s her real world which has broken the grip of social norms: her father punishes people for crimes before the evidence has been presented and has an unpredictable temper.  Nowhere is this reflected better than in his inability to grasp the significance of a gift from his father — a broken fobwatch left to him so that he would know the hour of his passing.  The step-father fixes the watch, destroying the meaning of his father’s gift.

We don’t fear the real like we fear the unreal.  The threats which could possibly happen are somehow less frightening than the threats which are imaginary and impossible.  If somebody attacked me like that, I think, I have a legal system around me which would make sure he gets punished.  If a white-face spirit appears in my bed, nothing will protect me.

I like to assure myself that I live in a universe of rules.  The physical universe governs matter.  The legal world governs other people.  The moral framework governs me.  Ghost stories threaten that assurance.  When they trash that rigidity of the framework through which we understand the world, they become terrifying.  Ju-On clearly does this to the greatest extent: a malevolent force that doesn’t want anything, that is completely inscrutable, and which cannot be resisted.  Ring, on the other hand, presents a ghost story which initially appears to trash our framework but, instead, reinforces it: the malevolent force is subject to reason and can be understood.  Pan’s Labyrinth is something like the opposite: when we trash our framework, the monsters will get us.

If anything, these three films should make us wonder why there aren’t more films like them.  Ju-On literally looks like it cost a biscuit and yet it is terrifying.  There’s nothing more gory in it than a kid covered in white paint and a woman covered in white paint crawling down stairs covered in blood.  If anything, this should convince us that (contrary to the argument of some people) censorship isn’t the reason why so many horror films suck; it’s lack of creativity.

5 responses to “And you cannot run or ever, ever escape… Some notes on horror films”