While most of Gawker media’s outlets have deteriorated significantly in quality (I’m especially looking at you, io9 — although I still swoon over Esther’s articles), Jezebel is still worth reading.  On Saturday, they posted an article, ‘Screw Princesses — Disney Villains Are the Real Role Models‘.

Princesses are usually defined by their sexuality and fascination with pretty objects and cute baby animals. White Disney princesses wear puffy gowns with petticoats (Snow White, Belle, Cinderella, Aurora) and non-white princesses dress the same way sorority girls do for questionably-themed parties. (Jasmine, Pocahontas, even, to a lesser extent, Mulan.) I didn’t want to be saved; I wanted to drive the plot rather than be pushed into a happy ending.

So instead, I was fascinated by villains, particularly Maleficent, the self-proclaimed Mistress of All Evil. She’s cunning, she’s ruthless, and she has a sick wardrobe. Not to mention: DRAGONS. Maleficent demands respect, and I expected the same, which is why, as a four year old, I refused to answer to anything other than “Maleficent” for months. [Source: Baker, ‘Screw Princesses — Disney Villains Are the Real Role Models‘, Jezebel]

The article is great and discusses the Baker’s (the author) desire to grow up like a Disney villain instead of a Disney princess.  It’s great stuff.

But it also got me thinking.  Having had quite a bit of practice at reading waaaaay too much into things and a lifetime of mansplaining, I thought: ‘Why do we see the villains as villains in these movies?’

You might respond: ‘Mark, old buddy, there’s no extra level of meaning here.  Grimhilde tries to kill Snow White.  Maleficent tries to kill Sleeping Beauty.  Ursula tries to turn people into wormy things.  These characters are evil because they do bad things.  Open and shut.  Get back to doing real things.’

But I think you’re wrong.  You sort of knew that Grimhilde was evil long before she went all ‘Time to eat Snow White’s heart!’  Maleficent is clearly the villain of the play from the second she appears in an explosion of green smoke, long before she gave Aurora a pretty shitty birthday gift.  While Ursula is a bit more of the ‘Muahaha, I’m evil!’ type of villain, her big crime isn’t that sinister: allowing Ariel to enter into a contract when she’s clearly a minor.

I clang on a lot about the necessary laziness of storytellers.  For folklore and fairytales, you sometimes need shortcuts to point out to the audience who is the evildoer.  All too often, this requires the audience to fill in the blanks with their prejudices.

Thus, in an underwater world of slender Caucasian women, Ursula is clearly the enemy because she has darker colours and a BMI greater than 18.5.  Although having tentacles and two nasty looking eels doesn’t help her win friends, her legalism is also a sort of unnatural evil.  Resorting to contracts and legal negotiations is no place for a woman — even one with tentacles and ugly eels.  Women should be interested in thingamabobs, whozits and whatzits galore.  The final demonstration of her evil is that she wants King Triton’s symbol of power — the Trident.

And why freaking not?  Nowhere in The Little Mermaid does Triton explain why he’s the rightful ruler of his soggy kingdom.  But we take it on trust that he’s correct; after all, Ursula has darker colours, is a woman, and is a darker fat woman.

Maleficient also struggles against conceptions of the correct colour skin, but also against the idea of how women should behave.  Here are the fairy godmothers:

Pinkish skin.  Pastel colours.  Not at all sexually intimidating.  Compare and contrast with Maleficent: 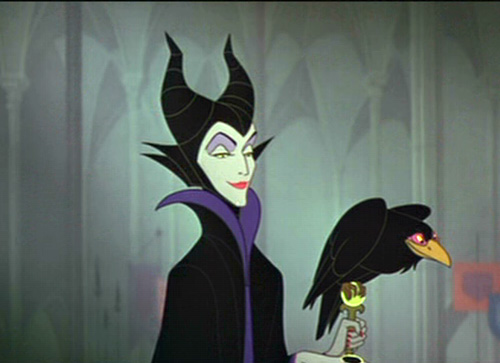 The plot of Sleeping Beauty links again with these ideas of a woman being evil if she moves outside her designated space.  Sure, cursing an infant to die on her sixteenth birthday is a bit of a jerk move, but compare her with the heroine of the story, Aurora, and you start to wonder if Maleficent wasn’t doing her a favour.  Aurora is betrothed to some boneheaded prince for the purpose of uniting a kingdom which, for all you know, has a policy of stomping on kittens.  The movie plays on our intuition that unified kingdoms are Good Things and anything which jeopardises that Good Thing is a Bad Thing.

In seriousness, why do we think the kingdom is so great that an arranged marriage is necessarily a good thing?  Because the non-threatening little women in the pastel colours are in its favour?  They are here in support of the arranged marriage.  Their gifts are to be pretty and have a great singing voice.  These are hardly the feminist icons or progressive philosophers.

Maleficent is clearly a utilitarian, viewing the removal of one person (the infant) as a necessary step in dismantling this insane feudalistic backwater where women are property to be traded for geopolitics.  That, of course, is really why she is evil: she sees Aurora as a means to an end rather than as an end in herself, and all consequentialists are evil or ignorant when you think about it, and Maleficent does not seem ignorant.

But Grimhilde from Snow White and the Seven Dwarves was the first and set the template.  All Grimhilde needed to do was look in a mirror and we knew she was evil. 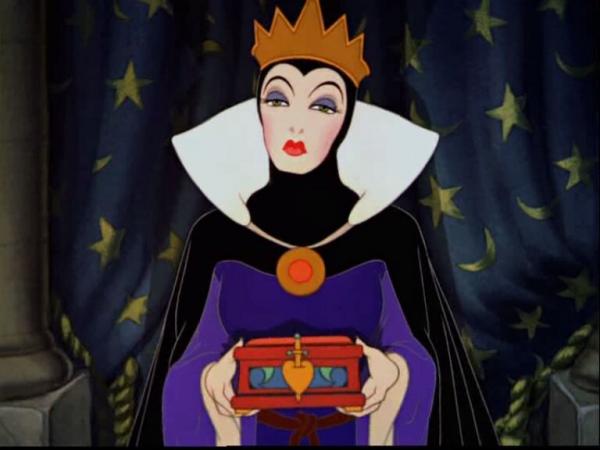 Where Maleficent was all about breaking down the power structures of an oppressive kingdom, Grimhilde is in the position of tyrant (implied to be an illegitimate hold on the power).  In many ways reflecting the attitude of some women in senior positions towards younger women, Grimhilde is trying to kill off competition.  Even before she gets out the box and hires a woodsman, Grimhilde is considered vain, has the trappings of power, and — most importantly — is not in the company of men.  Snow White, in comparison, sings about finding true love, hangs out with cute animals, and ends up hanging out with seven men as their maid.

This gets us back to the Jezebel article:

Villains are goal-oriented, while princesses are content with a puffball dress and Ken doll beau. Villains don’t put virginal love on a pedestal. One could even argue that villains provide an opportunity to teach your children about making the right choices. (For example, don’t be covetous/kill Dalmatians. Also, chill out if you don’t get invited to a party! That was Maleficent’s chief issue, which I’ll admit is a tad superficial, although I’ll argue that there’s way more going on beneath the surface. And DRAGONS.)

Princesses are only princesses because of who their parents are or the man they marry. Villains don’t get it that easy. Villains shape their own lives. [Ibid.]

Looking at these three examples and seeing the similarities: they are transgressive characters, they are active participants in their story arc, they happily trash gender norms when it suits them, and happily utilise them when it suits (further, they have three entirely different understandings of attractiveness).  More than anything else, they are intelligent — much more intelligent than anybody else in their films.  If I had a daughter, these are the sorts of traits that I wish she’d emulate — not the vapidity and vacuity of the protagonists.

I’d hide the spinning wheels, though.